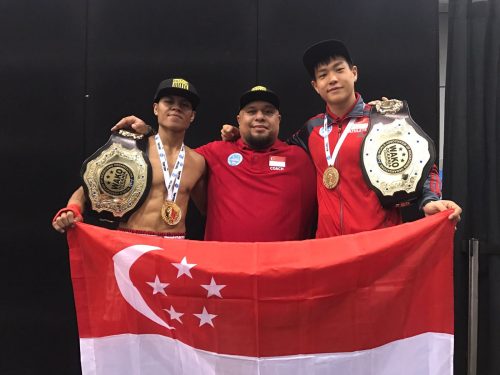 Local fighters from JFC, Terrence ‘The Terminator’ Teo and Muhammad Ashiq represented Singapore at the 2017 World Association of Kickboxing Organisation (WAKO) Arnold Classic & Oceania Championships on 18 and 19 March 2017 in Melbourne, Australia. Both Singapore fighters are returning home triumphant with their respective WAKO Oceania Championship belts after a dominant display of skill and tenacity to bring down their opponents.

Terrence, who faced off against Igor Kim from New Zealand, emerged victorious by unanimous decision after three gruelling rounds.

“This win is very exciting for me as I had to go up against one of the best kickboxers from New Zealand. I worked really hard with my trainer Arvind Lalwani, and I feel honoured that I can bring pride not only to my gym, Juggernaut Fight Club, but also to Singapore,” said Terrence Teo.

Also waving the Singapore flag was Muhammad Ashiq who fought against an Australian, defeating him by KO within the first minute of the first round.

“It was a great experience meeting fighters from all walks of life. I gave it my all to put up a good fight. I am proud to represent Singapore and I can’t wait to see what else is in store for me,” said Muhammad Ashiq.

An initiative of Arnold Schwarzenegger, the 2017 WAKO Arnold Classic & Oceania Championships is the world’s largest annual multi-sport festival which features live sports ranging from boxing, WAKO, Arnold Strongman, Brazilian Jiu-Jitsu and many more. The inaugural event also featured health and fitness workshops and activities for the audience to participate in. The event was also graced by a number of sports stars.

“I am very proud of both Terrence and Ashiq and what they achieved at the competition. Going up against fighters from Australia and New Zealand just showed that even if you come from a tiny island like Singapore, nothing can stop you from achieving your dreams if you’re willing to work hard,” said Arvind Lalwani, National Kickboxing Coach and Head Coach at Juggernaut Fight Club. “With WAKO as our sanctioning body, there will be more opportunities like this for our Singapore fighters. We are definitely heading home with our heads held high.”

ABOUT JUGGERNAUT FIGHT CLUB
Established in 2011, Juggernaut Fight Club (JFC) is a premier fight gym that embraces fight sports as an alternative way of fitness as well as producing some of the best fighters in Singapore and South-east Asia.