Paulaner Bräuhaus; Singapore’s first and only authentic German microbrewery, is back after an extensive two-month renovation period with a complete overhaul. Spotting a stylish and dapper interior marked by a contemporary palette of light maple, tan leather, matt gold and royal blue, the establishment exudes an intimate and inviting vibe. Keeping to the German “Geselligkeit” (sociability) concept, the updated menu of authentic Bavarian dishes is perfect with beer and for communal dining. Customers can look forward to revelling in the convivial atmosphere and the brand’s signature hospitality.

Paulaner Bräuhaus still brews its range of beers according to “The Bavarian Purity Law of 1516” – which is recorded as the oldest, currently valid consumer protection law in the world. Only four ingredients are used; water, malt, hops and yeast. The original version stipulated three, because yeast was not known as such in the 16th century and therefore its exact role in the brewing process had not yet discovered.

The earliest known documentation of the brewery dates back to 1634, when monks from the Neudeck monastery in Munich created a strong brew; later established as Paulaner’s Salvator beer, for their own consumption during Lent and later for sale at the monastery and nearby taverns. The 375-year-old recipe has been refined and it is still brewed and served seasonally at Paulaner Bräuhaus today. It is a deep chestnut double Bock with notes of chocolate. Three proprietary styles of beer are on tap all year round at Paulaner Bräuhaus.

Exclusive beers such as Maibock – to celebrate Maifest which celebrates the arrival of spring and Festbier – the Oktoberfest brew, are also available for customers to sample during specific times throughout the year.
The beers are brewed onsite and they are available for takeaway. Paulaner Brauhaus’ kitchen is helmed by Executive Chef Klaus Lukarsch who has over 25 years of experience in German cuisine. Check out some of the dishes below!

Obazda with pretzel ($16.90, right) is a recommended option to kick off the meal. Obazda – a Bavarian cheese spread made with fresh butter, camembert, various spices, chopped onions, and topped with fried onions – is served with the ubiquitous savoury Munich-style pretzel. 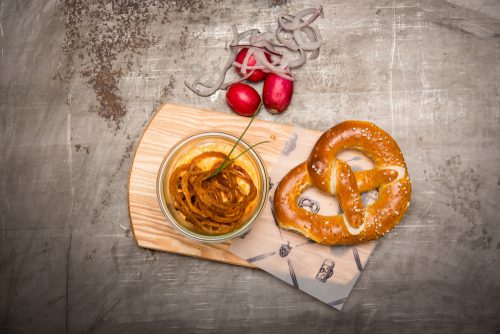 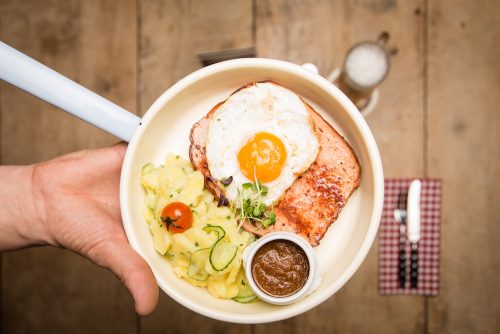 Not forgetting the Pork knuckle ($31.90, pictured right) presents a whole bone-in pork knuckle which is first marinated in a Bavarian spice blend, brushed with Paulaner beer, and then over-roasted for 2.5 hours to render its characteristic crispy crackling and succulent flesh. Served in a roasting pan with a side of house-made sauerkraut and semmelknödel – a traditional bread dumpling, this makes a hearty meal-in-one. Never leave without ordering their Pork Knuckle! 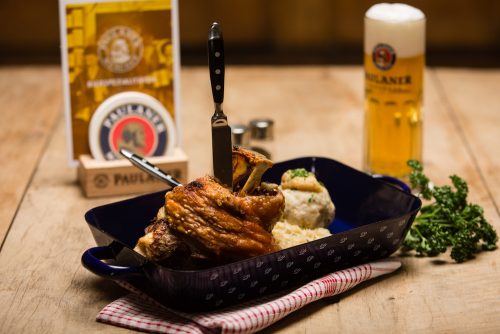 Another signature item to sample is Pork schnitzel ($25.90); pork escalope coated in seasoned breadcrumbs and fried in butter till golden. The schnitzel arrives resplendent on a mound of French fries with lemon wedges and ketchup.
An integral part of any German repast, a selection of traditional- style sausages is also featured on the menu. Besides Original weisswurst ($14.90) – minced veal and pork sausages, and Würstl trio ($17.90, pictured left) – chopped pork sausages, white bratwurst, and grilled chicken sausage, the Currywurst “hot paula” ($12.90), is not to be missed. A six-inch smoked pork sausage is served with an irresistible curry tomato-chilli sauce, dusted with curry powder and paired with a side of fries. Why have one when you can have three?

Whats for desserts? Apple beignets ($14.90, pictured right); a Paulaner Bräuhaus rendition of perfectly-fried apple rings in a wheat beer batter with a sprinkling of cinnamon and sugar. Dip the apple rings into the accompanying vanilla ice cream and vanilla sauce with berry compote for an indulgent treat. There are more than enough reasons to head down to Paulaner Bräuhaus for your date, or a gathering where you can chugg down a pint or 2. Not forgetting their Sunday Brunch, Paulaner Bräuhaus serves up a sumptuous German brunch buffet from 11.30am to 2.30pm.