If there was a local theatre production that’ll do Singapore proud, I’m certain it has got to be Singapore Repertory Theatre’s Forbidden city, Portrait of an Empress. With three sold-out runs and over 100,000 tickets sold, mark this epic musical on your calendar!

Two of the greatest icons of China’s ancient history come to life before your eyes in a spectacular musical of epic proportions. Come step into the cloaked world of the Forbidden City and the legendary Empress Dowager Cixi. You’ll be mesmerized by this soulful tale of dark secrets, whispered rumors, love, betrayal, and power. Forbidden City: Portrait of an Empress explodes on stage with stunning sets, costumes and the ever-haunting question of the truth. 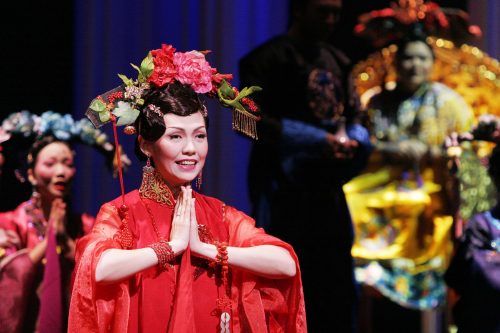 We speak to Kit more about reprising her role as Yehenara.

11 YEARS LATER, HOW WOULD YOU PORTRAY THIS SAME CHARACTER CI XI?

Actors all evolve with the passage of time and the accumulation of experience. One thing that happens naturally is that an actor will imprint a part of him/herself on the role regardless. I think that now, it would be easier for the gravitas required for the role to come through with less effort on my part. Also, as I am no longer playing the younger concubine (Cheryl Tan will now be taking on this role), there is less deliberation over how my character would develop from Act 1 through to Act 2, with some specific acting choices made then to differentiate between the younger and older Ci Xi.

WHAT SORT OF PERSON IS GOING TO LOVE THIS CHARACTER?

I suppose the people she had been kind and open with. If you mean as an audience, I think people who have survived victimization might find a sense of vindication in how she overcame her circumstances, scruples notwithstanding. ☺ Ci Xi was a survivor, and one of the earliest feminists for sure. She somehow managed to become a very formidable foe against all the patriarchs in the palace. (Way to go, girl!) But of course she paid a heavy price, and her life wasn’t exactly a happily-ever-after scenario. It is a terrible personal tragedy, I feel…☹

WHAT DO YOU LOVE ABOUT THIS CHARACTER?

I love the drama she goes through…it’s a great role to tackle. I kind of miss playing the younger Yehenara, because I am unable to follow through her journey now, and she has so many great songs…but I am also relieved because it was a ridiculously huge role, and it was incredibly exhausting physically and emotionally. Now with a scaled-down role, I am able to focus more on the details, and in a way enjoy the whole process more with less anxiety. I also find that having 3 different actresses playing the different phases of Ci Xi’s life add more color and layers to this very complex character.

WHAT’S THE BIGGEST CHALLENGE ABOUT TAKING ON THIS ROLE AGAIN AFTER 11 YEARS?

In many ways, it is less challenging now, as I have mentioned earlier, because my role is scaled-down, but the biggest challenge remains – the damn headgear! It is heavy and uncomfortable and throws your whole balance off, but damn, it looks good! 😛

BESIDES YOURSELF, WHAT CELEBRITY WOULD YOU LIKE TO SEE TACKLE THIS CHARACTER?

I think Cheryl Tan is doing a very nice job with the younger Yehenara role. I’m sure that given time, and the perennial appeal of the show, she can eventually play the role I used to play for the last 3 runs.

WITHOUT GIVING ANYTHING AWAY, WHAT’S YOUR FAVORITE LINE OF DIALOGUE?

“I only dreamt of love and growing old” is a line from my song “Why Dream of Love?” I find it terribly poignant and heartbreaking. It is the most natural thing for any woman to dream of. For me, it underlines the humanity of Ci Xi. She is larger than life, but all she wanted was what any woman would have wanted. And that is how I relate to her.

BESIDES YOURSELF, WHICH ACTOR IN THIS PRODUCTION IS GOING TO BLOW PEOPLE AWAY?

Haha! You are very kind. ☺ Well, I really think we have a solid cast, with a very strong ensemble. I think the show is entertaining, moving and spectacular! And because we have successfully staged it 3 times before, it is proven to be a masterpiece. We now have the luxury of working really fine details in the staging and the story-telling, so it is only going to get better! Sebastian Tan, Benjamin Chow, Sheila Francisco and Cheryl Tan, etc, are all going to blow your mind! ☺

IF YOU COULD PLAY ANY OTHER CHARACTER IN THIS SHOW, WHO WOULD IT BE?

Maybe one day when I’m much older, I could tackle the Old Empress role! Watch out!

WHAT’S THE LAST THING YOU DO BEFORE YOU STEP OUT ON STAGE / THE CURTAIN GOES UP?

Say a little prayer, stay in the zone. All that Jedi stuff…☺

WHAT IS THE ONE THING THE AUDIENCE CAN LOOK FORWARD TO IN THIS UPDATED PRODUCTION?

We thank the entire team from the Singapore Repertory Theatre and Kit for facilitating this interview.