Looking for designer cakes? Cake Avenue, will release an all-new dessert menu featuring 6 playful twists to classic diner foods of the 60s and 70s. The new dessert menu is in line with the cake shop’s 17th Anniversary this year and was created by head pastry chef E.T. Yew.

The new menu features 6 creations designed to mimic the look and feel of classic savoury diner foods such as hamburgers, corndogs, nachos and alphabet soup, yet surprises the senses with a delightfully sweet and palette pleasing dessert instead. Apart from the 6 dessert items, customers can also sample Cake Avenue’s pre-existing entremets such as the Chocolate Sensation, Berries and White Chocolate and the Green Apple. Born out of the passion to excite customers with beautiful and playful cakes, owners Natalie and Chuan Sheng Wong set up their first humble outlet in 2000, less than half the space of their current premises. Their business expanded exponentially when they brought Chef E.T. on-board who, himself had already mustered a following in Malaysia. Recently, Cake Avenue expanded its business to a full-fledged café concept, offering simple café meals alongside French-style desserts. The café is also Halal certified. “Cake Avenue has always been a place where customers can come to have fun with their desserts. We made birthday cakes that were designed to look like Bar Chor Mee, and Anniversary cakes that looked like branded handbags. It was only natural that we now launched a collection of in-house desserts that muddled the senses once again – your eyes see one thing, yet your tastebuds register another”, says Chef E.T. of the new menu. 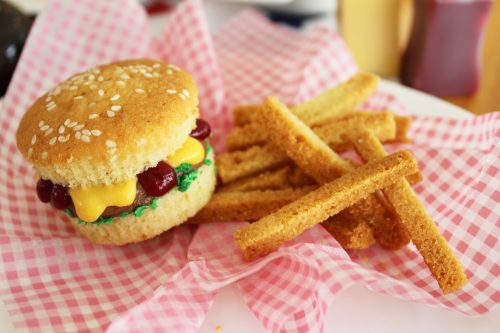 What’s more iconic than a plate of burger and fries? Check out the Diner Sliders and Fries (S$15.90) which feature two slider-sized burgers, each comprised of a dark chocolate ice cream burger patty sandwiched between vanilla butter cake buns.
The feast is topped off with a side of warm fries made up of vanilla cake. And what’s burger and fries without its mustard and ketchup – in this case, dig into citrusy passionfruit puree ‘mustard’ and a tangy raspberry puree ‘ketchup’. You can also order a side of cake fries with the two sauces for just S$8.90. Already a favorite at carnivals and Pasar Malam, Cake Avenue’s corndog homage, called The Great Con Dog (S$8.90), substitutes the sausage meat for warm sweetcorn custard, encased in a crunchy breaded exterior. To cool the whole dish off, a side scoop of vanilla ice cream served with fresh strawberries. 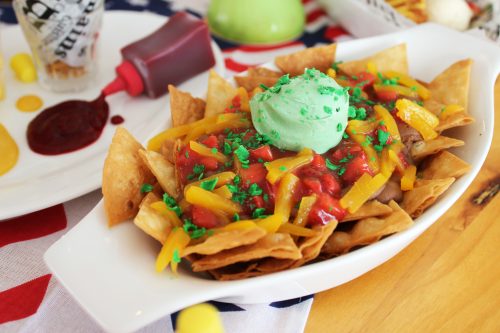 Dessert is meant to be shared with loved ones, and so the addition of Nachos Dulces (S$12.90), a twist to that tex mex favourite which is good for two people. The dish includes crispy flatbread nachos packed with the usual toppings such as chocolate mousse ‘refried beans’, strawberry compote ‘salsa’, julienned peach ‘cheese’. And pistachio ice cream ‘guacamole’. Just a few scoopfuls of this dessert will make you shout “Ole!” for another helping! Perhaps the most stunning of the entire menu is the Alphabet Soup (S$8.90). Designed to remind us of our youth when we learnt the alphabet by eating this iconic canned soup, Cake Avenue now camouflages a refreshing, creamy lychee mousse entremet with chunks of lychee and raspberry fruit within. The dish is then topped with sweet milk agar ‘alphabets’ and a rose jelly ‘consommé’. 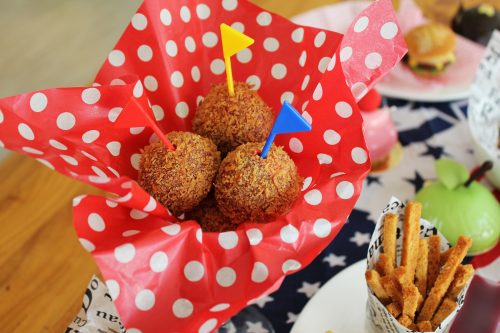 Finally, a twist to those crunchy meatballs – the Lava Pops (S$8.90) is meatball-sized portions of warm red velvet cake with a crunchy breaded exterior. One bite and your mouth will be filled with its molten vanilla cream cheese filling. A first of its kind, the Lava Pop is perfect to be shared among friends or just taken away to be eaten later.