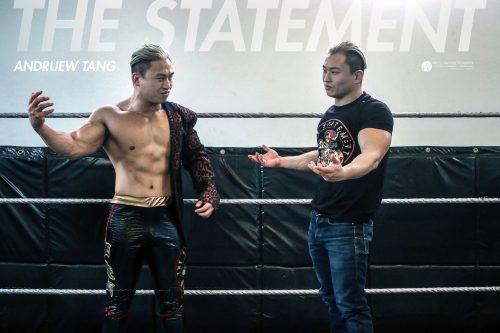 We speak to Andruew Tang, also known as “The Statement” to find out more! WHO WERE YOUR FAVOURITE WRESTLERS GROWING UP?

I have a number of wrestlers that I idolized when I was growing up watching pro wrestling. As you know every wrestler has their own unique selling points, be it in their character, the type of wrestling style that they incorporate into their arsenal. So it’s only fair to have a few favourites.

In terms of charisma, promo, storytelling- The Rock. Because he is so charismatic in thrash talking, the ability to always craft impressionable taglines throughout his career. Every move that he does tells a story.

For the Lucha Libre style, definitely will be Rey Mysterio as in the 90s he clearly revolutionize the art of high flying, with his unique and innovative repertoire of moves. He uses speed to compensate power in the land of the giants

The all-rounder will be Chris Jericho or Shawn Michaels. Both wrestlers are so similar in every way, they are technically sound when it comes to wrestling, they can pull off high-risk manoeuvres with ease, they are one of the best trash talkers in the business. And they have a really good looks as wrestlers.

WHO HAD THE GREATEST INFLUENCE/IMPACT ON YOUR LIFE?

The greatest influence would actually be The Rock, when I saw him in the ring, I was captivated by his charisma, the ability to control the emotions of the fans with the palm of his hands. He was like childhood hero, overcoming the odds, and I will always remember the People’s Elbow and The Rock Bottom. It never fails to get everyone at the edge of their seats.

WHEN DID YOU DECIDE YOU WANTED TO BE A PRO WRESTLER?

I believe at the age of 10, I was first introduced to pro wrestling by my cousin, I remembered playing Smackdown the video game on PlayStation and getting my ass whooped. But I was very fascinated with the characters and moves, so I started watching it on TV. When I first watched pro wrestling, I fell in love with the sport and the larger than life personas and I told myself that one day my dream is to step foot into the ring and be like my idols in the WWE. To have that commanding presence and control over the legion of fans watching the product. DO YOU EVER GET TIRED OF CONSTANTLY WORKING SHOWS?

They may be times where we have had back to back bookings, having to perform in different countries which mean long travelling time on the plane. However,
it is wrestling we are talking about here. When my music hits, I step through the curtain and I head on stage, I feel the adrenaline flowing through me. The rush to put on the best match of the night and to leave a Statement on everyone’s mind.

WHO’S YOUR CLOSEST FRIEND IN THE INDUSTRY?

My closest friend in the industry is Sean Tan Ringname Trexxus. In a way we climbed up the ladder of success together. We were the first Tag Team Champions Of SPW and we both distinct privilege of being the SPW South East Asia Champion. He is my training buddy and my confidant. He is a like a younger brother to me. And it amazing how sometimes he can put up with my nonsense. 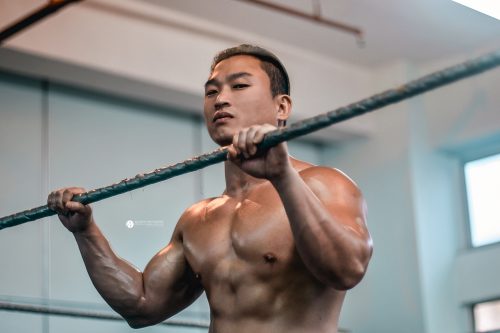 WHAT ARE YOUR FAVOURITE MATCHES?

WHO DO YOU ENJOY WORKING WITH IN THE RING THE MOST?

It’s always good fun working with Trexxus in the ring. We have worked together in Tag matches and we have faced each other as opponents but result is always the same, we will always steal the show WHAT IS YOUR FAVOURITE MATCH THAT YOU’VE BEEN IN?

I’m very torn to choose between two matches, my match against the WWE UK champion- The Bruiserweight Pete Dunne and the SPW South East Asia Championship match against Trexxus

The match against Pete Dunne was definitely a significant milestone in my career, as it is a match where I can gauge my standard against a current WWE champion and one of the top rising star in the pro wrestling industry. That match delivered as I received positive review and feedback about the match. Everyone in the arena was at the edge of their seats, and when the match ended, Pete Dunne cut a promo on me gave me some wise words to make a name in the pro wrestling industry.

My match with Trexxus at Unchained in Changi was special for me as it was the match where the WWE scouts were watching to scout for potential talent. And Trexxus and me worked a long way up to get to where we are. 2013 we had a match together we weren’t main eventing, but we told each other that we will do a match that everyone will talk about and it will be the “main event” for the evening. 4 years later in 2017, we were the Main Event and we delivered. The WWE scouts were truly impressed with both of our performances and we even got featured as a thumbnail for their videos. WHAT IS THE BIGGEST OBSTACLE TO BECOME A PRO WRESTLER IN SINGAPORE?

I think the biggest obstacle faced by a lot of pro wrestlers in Singapore is definitely time. Most of my wrestlers do have a full time job or are studying. So it’s really hard to juggle work, gym, wrestling training and overseas booking. As in Singapore it’s not like every week we have events, so we need to rely on overseas booking to put our name on the map. But due to commitments it’s really hard to achieve that.

WHAT ADVICE DO YOU HAVE FOR ASPIRING WRESTLERS?

The time for procrastinating is over. You need to take the first step to turn your dreams a reality. You do not want to live a life of regret. You don’t have to take a risk overseas. Here in SPW we are platform where you can live your dreams and have a taste of what it’s like to perform in the squared circle.