Paul Nagaoka was raised in the United States by his mom who taught him he could do  anything he set his mind to. Believing her wholeheartedly, he began his entrepreneurial pursuits at the age of 12.  After retiring early from his career as a real estate investor, Paul decided work needed to be about passion and followed his into the entertainment and fashion world.

Paul’s love of people, pursuit of learning, and desire for new experiences make his presence contagious. His charisma and confidence bring a fresh energy to any environment. He truly is the “life of the party!” And… you haven’t even seen his dance moves!

Based in Singapore, Paul is an actor, host, social influencer and international model with Beam Artistes

Paul took time off his very very busy schedule to speak to us and oblige us for a photoshoot!

SO WHAT ARE SOME OF THE EXTREME SPORTS THAT YOU LIKE TO DO?

I grew up in the Pacific North West in the United States, so I grew up backpacking, kite surfing, snow-boarding, scuba diving, adventure hiking, those types of activities are what we do all the time. We’d park anywhere in the city and you can jump off a cliff, in the water and play around like that with your friends is what we did.

Some of my favourite activities right now that I do, I find my favourite is kite surfing, it’s epic. You go 90 miles an hour, you catch 100 feet of air, it’s just an incredible experience, kite surfing. Then, probably, the next is scuba diving, and specifically, my favourite thing to do is scuba with sharks, large sharks. They’re really exciting, beautiful creatures when you’re underwater with them. 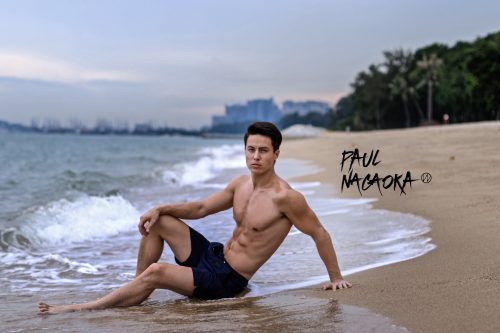 WOW, DID YOU SUFFER ANY MISHAPS SO FAR?

I’ve cut all my limbs. I did have this one incident, I was spear fishing in Hawaii and I took my brother along, it’s safe, don’t worry about it. His first time in the water we go out and I’ve got my spear gun and we’re going out, he following, and there was a 12 foot Galapagos shark.

And usually they’re not dangerous, but this one was really territorial. So I was going around and I grabbed him like, there’s a shark behind me. I had my spear gun, the thing would swim up to me and then I’d point my gun at it, and then like it was going to come to bite me. Then I’d go like this, jab at it with the gun, it would do a circle and a loop, and it would come back around to come and get me and then I’d go on another loop. We swam backwards and I kind of fended it off with my spear gun; so that was probably the closest situation I’ve had with a shark, but incredible stuff like that.

I was in Mexico and I was diving and spear fishing, and as opposed to going with the tours I looked for some local grungy people that were fishermen. They didn’t speak any English, I’m like, take me on a boat, I want to go wherever you go. So I went out with them, they spear fish for a living.

Anyway, I went with them.  I caught an 80 Pound stingray, a huge stingray.  Then I saw these fins coming out of the water like this, and I said, oh, gosh, that’s cool, what is it? Then it started coming closer and I realised they were wild dolphins. So I jumped off the boat and I started swimming towards them, and it was amazing. They’re incredible creatures, they’re super curious when they’re actually in the natural wild. 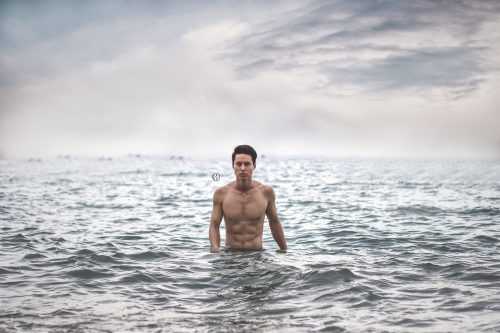 YOU’RE SO GOING TO BE BORED. YOU CAN’T DO THESE STUFF IN SINGAPORE!

Oh, you can, so I’m going to Australia, I’m doing a travel show, and I would dive there, there’s all sorts of places. I love diving and I love kite surfing.

WITH YOUR VERY BUSY LIFESTYLE DO YOU HAVE A SPECIFIC DIET, HOW DO YOU KEEP YOURSELF FIT AND LOOKING GOOD?

I was in a major car accident six years ago. I got thrown over the top of the vehicle and landed on asphalt on my head and my back, so that’s 23 metres. I went 23 metres in the air, and landed on the asphalt and got an ambulance to the hospital, and the police report they checked out, there are three boxes in terms of severity, not very severe, severe, and fatal; the cop checked fatal, that I was going to die on the way to hospital.

Anyway, I got there and through the process, I ended up having a brain injury, and had to go to a brain rehab clinic for a month. I was bedridden for a year, I was in a wheelchair coming out of the hospital. Had to relearn how to walk and all my muscles atrophied, I was in the worst shape, worst shape of my life, I was miserable. I made this decision two years in that I’m too young, I don’t want to live like this, I was in so much pain. I said, this year I’m going to be the healthiest and fittest I’ve ever been in my life; and I could still barely walk.

What I did is I made small goals that I was going to start doing throughout the year, and they were basic, really simple and really bite size and doable, and I did them consistently over time.

It was embarrassing and difficult and struggled, but I had to go through, and I got a passion from that to help other people be able to walk through difficult things; so I started working with morbidly obese and type two diabetic people.

I am not a certified personal trainer, but I know a lot about that. I basically built this concept called the Model Diet where you can implement it with small bites over time and have it be consistent, where it can fit in a busy person’s life and they can stay fit and healthy for life.

What a lot of people do, and I seen a lot happen, people get on these fads, these dieting fads. Okay, I’m not going to eat anything besides cheese until I feel like I’m going to fall over. I’VE TRIED MANY DIETS, BUT IT WASN’T SUSTAINABLE

Yes, so how do you do something that’s sustainable? And what happens when people do these diets is they’re exactly that, they’re temporary diets, they lose ten, 20, 30, 40 pounds but then three months later they gain it all back. It’s because they’re doing something they can’t sustain over a lifetime.

So I created this concept called the Model Diet, and it addresses basically how you eat, and then how you exercise. It takes these things and breaks them down into the most simple components, and the, over time, it gets a little bit more challenging throughout a period of time. Over a course of six months or a year your body changes, and the good thing is you can sustain it for the rest of your life; that’s actually what I do.

Basically, what that looks like is a quick, but it depends, if I’m working with somebody who’s morbidly obese or type two diabetic it’s a different programme where we’ll start with something really basic.

For the first two weeks I’ll have them go downstairs first thing in the morning, drink a cold glass of water, eat 20 grams of protein and then do like ten air squats, and move their arms like this, and that’s their workout.

PN Yes, and then in two weeks, once they’ve done that consistently, I’ll move it up a little bit, till they’re actually doing a really healthy intense workout. It doesn’t take any more than five or ten minutes, that’s it; and if it gets any longer than that people can’t realistically do it.

I work out really hard, but I only work out ten minutes a day, and I only do it like this. So I work out less than an hour total actual time. Then my diet, so that I can sustain it, it’s basically the key in most important block of this are that you eat 20 grams of protein in the morning and drink a cold glass of water right when you wake up, within 20 minutes of waking up. You don’t eat any carbs during that time. Breakfast is boring, can you remember what you ate for breakfast 10 days ago? I don’t think so. You probably had a really delicious dinner somewhere that you can remember that was awesome; nobody cares about breakfast. So eat the same boring thing for breakfast with no carbs for breakfast, and then you have one out of three meals that was perfect.

Then my goal is basically two meals a day I eat perfect, and then the third meal I eat sort of more whatever I want. I don’t go crazy consistently, but I’ll eat noodles and nuts and sticky rice and whatever.

So that slow cadence workout, I do seven seconds up, seven seconds down, and I’ll do five and seven reps of that; and I do it 100% daily. I literally cannot lift the weights at all, then I’ll do three sets of that; and then I’ll drink protein right afterwards, and that’s all you’ve got to do. That and your abs the next day, and then your squats and your legs, do the same type of programme with your shoulders and your back, and you start it over the next week. That’s really all you need, honestly. THE KEY WORD IS SUSTAINABILITY

Yes, exactly; the word is sustainable over a long period of time, so more people can manage.

WHAT OTHER UPCOMING PROJECTS DO YOU HAVE?

The plan is to home base in Singapore, that’s the goal.

One of the bigger projects that I’m working on, that I’m looking forward to the most, I’m working with Imagine Group. They do the highest calibre reality shows in Asia, so they do Fit For Fashion, The Pretender, all those shows. There are about six different shows that they do.

I’ll be hosting the National Youth Awards, and I’m working on a TV show concept that I’m actually co-producing and hosting. I’m not just on the front side of the camera, I’m actually on the backend as well.

We thank Paul Nagaoka for his time and sharing the tips to staying fit and healthy despite a busy schedule. We hope to see more of him soon!