CASIO Singapore has unveiled two other commemorative series of G-SHOCK timepieces to mark the icon’s 35th anniversary. Like the BIG BANG BLACK, these novelties allude to specific facets of the G-SHOCK and their evolutions since its inception in 1983. 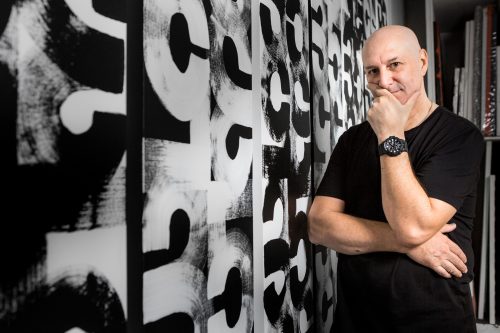 The new GA-700EH-1A is the latest result of the collaboration between longtime partners G- SHOCK and Eric Haze and is based on the men’s GA-700 watch. This timepiece has been customised with a black-and-white colour scheme rendered in a brushstroke-like pattern and carries other detailing like Eric Haze’s signature star on the watch strap, as well as his logo on the case back.

This watch marks the seventh time that Haze has partnered with G-SHOCK to design timepieces with a decidedly urban twist. Haze has collaborated with G-SHOCK for over 20 years and worked on models such as the DW-5600, DW-6900, G-304, GA-100, and GA-110 in the past. The world-renowned graphic artist was previously also involved in creating commemorative models celebrating the G-SHOCK’s 25th and 30th anniversaries.

Said Haze on the collaboration, “This most recent design represents a style of brush painting I have been developing seriously over the last five years. The beauty of the relationship CASIO and I have developed for over 20 years now, is that they trust and allow me to follow a new direction for every project, which keeps the work fresh for both myself and the audience.” The G-SHOCK GOLD TORNADO is a series of three commemorative G-SHOCK timepieces featuring brilliant gold accents against a base of black and red. Black is, of course, representative of the G-SHOCK brand; the three GOLD TORNADO watches all showcase monolithic cases and straps in black, with bright red used on the back of the straps to create a fiery contrast. Meanwhile, metallic components such as the bezel, case details, screws, and crown have been treated with gold ion plating. The color symbolizes the G-SHOCK’s ongoing legacy of impacting the world by developing timepieces with ever-improving toughness, the brand’s aspiration to maintain its brilliant presence with its products, and finally the astonishment and delight these timepieces evoke in their wearers. The case backs of the GOLD TORNADO timepieces have been engraved with the G-SHOCK 35th-anniversary logo designed by Eric Haze, while their strap keepers come emblazoned with a star emblem symbolizing their 35-year history. Their dials also feature “SINCE 1983” – a nod to the G- SHOCK’s heritage. The three models in the GOLD TORNADO collection are the GPW-2000TFB, equipped with the latest Connected Engine 3-Way module, the G-STEEL GST-B100TFB featuring a carbon composite bezel, and the FROGMAN GWF-D1035B, a dive watch for professionals.

The new timepieces will all be available at G-FACTORY stores islandwide.